He was born on September 2, in Brygidki Prison in Lviv, where his mother, Kateryna Zarytska, was serving a sentence on political charges. The boy was raised by his grandfather, professor of mathematics at Lviv University Myron Zarytskyi, and grandmother Volodymyra of the Zafiyovsky family.


In 1958, he graduates from an evening four-year art school and enters the Lviv School of Applied Arts named after I. Trush, the department of ceramics. D. Dovboshynskyi and K. Zvirynskyi teach senior courses at Soroka. In his early creative work, the artist was influenced by his friend Roman Petruk, who from 1959 attended the underground academy of Karlo Zvirynskyi. In 1960, he also became acquainted with Yaroslava Muzyka, under the influence of which he became interested in ancient iconography and modern graphics.

In 1961–1964 he studies at the Department of Ceramics of the Lviv State Institute of Applied and Decorative Arts. Since 1962 he had been taking private plein air painting lessons from the senior generation artist, a graduate of the Warsaw Academy of Fine Arts, Omelian Lishchynskyi.

After the scandalous exhibition of the Soviet avant-garde in 1962 in Moscow, on behalf of the Communist Party, a Kyiv lecturer arrived in Lviv with an ideological report on formalism. Bohdan Soroka and Laszlo Puskas were threatened with expulsion from the Institute for a reasoned discussion. The rector, Professor Yakim Zapasko, saved them.

Since 1964 he had been trying his hand at printmaking, working with linocuts. In the same year he performed a diploma work which caused the rejection of the examination commission — a constructivist ceramic set in the style of Bauhaus.

In the mid-1960s Soroka meets members of the Kyiv Club of Creative Youth “The Contemporary” — Ivan Svitlychnyi, Ivan Dziuba, Halyna Sevruk. Since then he becomes interested in ancient Hutsul art — collects “trinity” candlesticks. Since 1966, when the arrests of dissidents began, Bohdan Soroka had been watching all the trials of his friends. In 1968, he took an active part in the nativity scene organized by the Lviv Sixtiers.

In 1969, at the request of I. Svitlychnyi, he created illustrations for I. Kalynets poetry collection “Opening of the Nativity Scene,” which was published in Switzerland the following year. Subsequently, these engravings, made in the avant-garde style using the folk archetype, will be given the general name “Folklore motifs.” Their original continuation is the cycle “Ukrainian Mythology” (1970–1971), which develops the themes of folk customs and Ukrainian demonology. While creating images of a pagan pantheon, the artist consulted with the famous Kyiv dissident archaeologist Mykhailo Braichevskyi. Interpretation of form and space, rhythmic principles are borrowed from the samples of ancient folk engraving.


In February 1971, the artist’s works were exhibited as part of the exhibition “Modern Ukrainian Graphics” in three American cities — Philadelphia, New York, and Cleveland. In January of the following year, the pages of the Literary Ukraine newspaper began harassing the participants of the exhibition. Special meetings of the monumental shop of the Lviv Art Fund and the Lviv branch of the UWC were convened for the public accusation of Bohdan Soroka.

In the spring of 1972, with the assistance of Metropolitan of the UAC Mstyslav, the Book “Sign of the Sixties” was published in the United States, with the ex-libris of Ivan Svitlychnyi by B. Soroka printed on the title page. This prompted the KGB to open a criminal case against the artist. His works had not been exhibited for a decade, and his name had not been mentioned in the press.

In 1973, Vira Vovk’s album “Singing about New Ukrainian Art” was released in Rio de Janeiro, where among the works of 27 Ukrainian artists, early works by B. Soroka were published. In the same year, the graphic series “Our People” appeared, where the artist ironically depicts the images of ordinary members of consumer society with its archaic consequent moral defects — greed, lust, laziness, etc. At this time, Soroka’s graphic style of “rough contrasts” crystallized, when the figures on a perfectly white or black background appeared as if under theatrical lighting, i.e., the modeling of light and shadow occurs without interim tones. The images themselves are enriched with expressive facial expressions: they wear grimaces of horror, crazy joy, despair, etc.

In 1975 the graphic series “Symbols of Skovoroda” appeared, where the same moral manifesto was hidden in the metaphors of philosophical parables; the following year — the series “Human Weaknesses,” where through grotesque and metaphor the author mocks the rudiments of Soviet society: careerism, insidiousness, hypocrisy, servility.


Throughout the decade, he was working on a series of graphic panoramas “Architecture of Lviv” and “Journey through Uzbekistan,” which traces the influence of European structuralism. These works are included in the textbook history of Lviv graphics, they have been presented in many international projects (France, Canada, Poland, USA).


Works on graphic illustrations to the works of Lesia Ukrainka, Roman Ivanychuk, Vasyl Stefanyk, Taras Shevchenko, Ivan Koshelivets. In the series “Psalms of David by Taras Shevchenko” (1988), he returns to the moral manifesto and sharp accusatory metaphor. Formally, it is a new plastic search for a combination of texts and figurative plots.

In 1989, he wins an award at the international bookplate competition in Vilnius (Lithuania). Gains wide recognition in the field of ex-libris, having carried out here no less important formal evolution, than in plot works.


In 1990, he holds solo exhibitions at the National Museum in Lviv, the Taras Shevchenko Museum in Kyiv, as well as in Canada and the United States. In the same year he accepts an invitation to teach drawing at the Department of Drawing of the Lviv State Institute of Applied and Decorative Arts; in May 1996 he becomes the head of the Department of Industrial Graphics, where he works until 2005.

In 1994 he works on the graphic series “Passions of Christ” with the texts by the Lviv poet Viktor Neborak. In times of intense interfaith conflicts, the artist actualizes the postmodern irony of ritual religiosity; the engravings show the post-totalitarian absurdity and grotesque image of the crowd.

The cycle “Emblems and Symbols” (1996–1998) becomes a revolutionary step in terms of compositional solutions and graphic language. The artist introduces into the figurative system the semantics of the “metaphysical room” and the mirror, the form of “mannequins,” combines several contexts in one composition for the sake of a new form of his moral manifesto. He foretells the advent of the era of information technology, where eternal moral values may be lost.

In 2014, the artist’s memoirs were published, illustrated with a retrospective of his graphic work.


Dies in Rzeszow (Poland) during surgery. Buried in field No. 59 of Lychakiv cemetery. 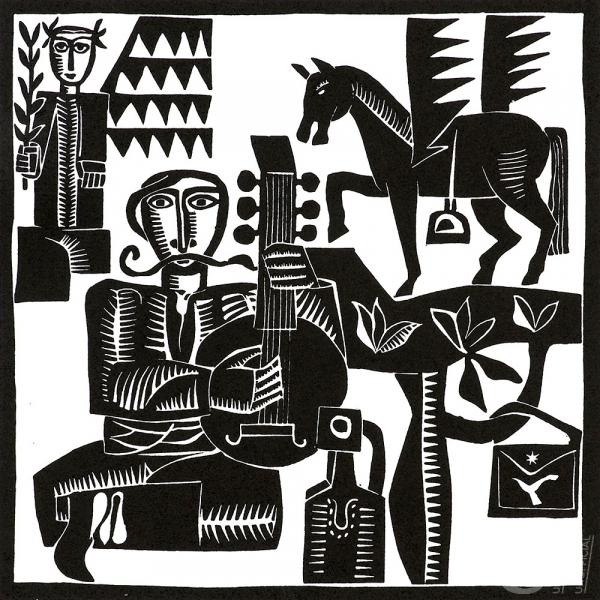 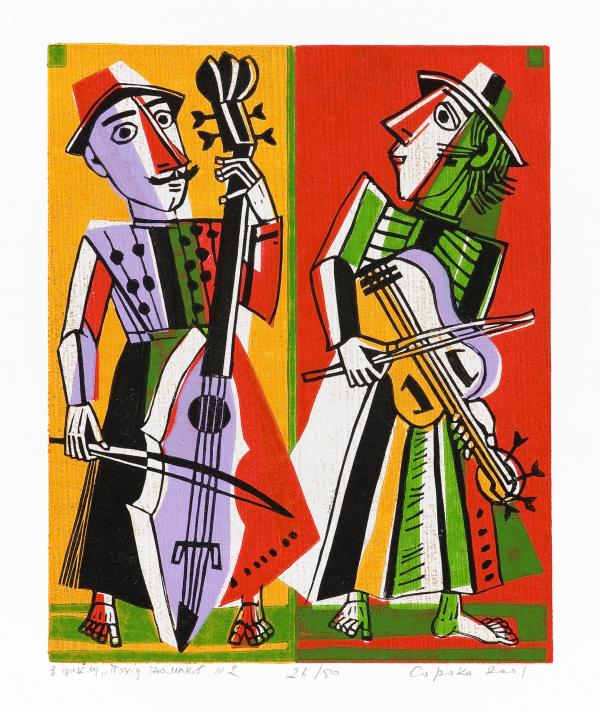 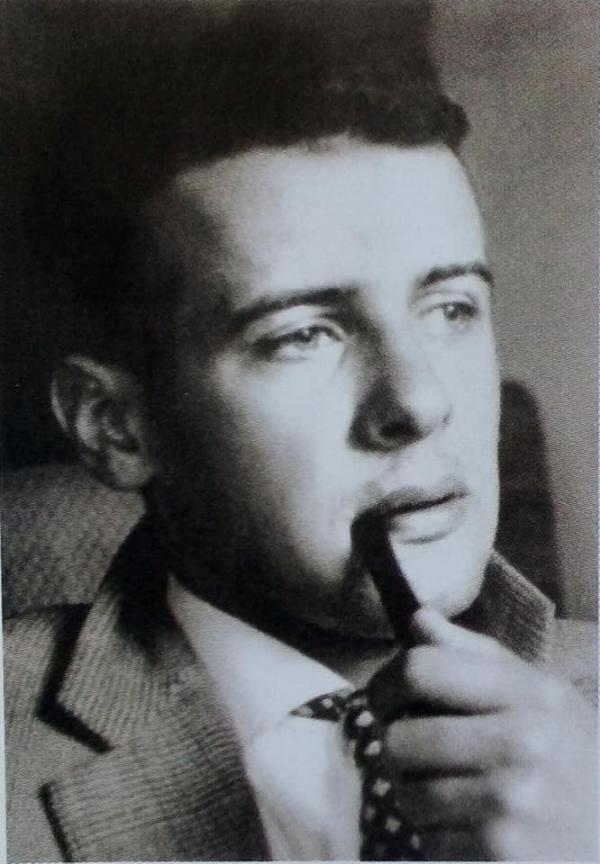 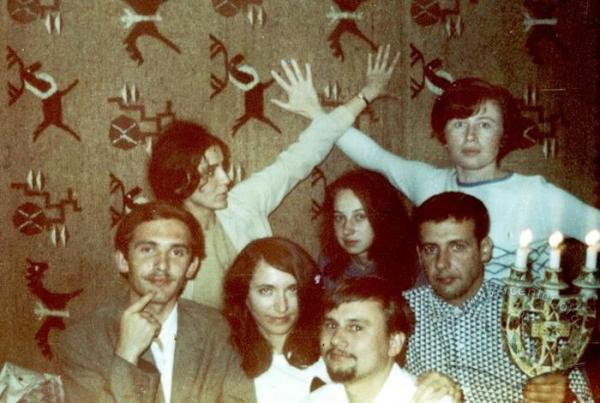 Visiting Bohdan Soroka. Seated (on the right): Bogdan Soroka; next to him is his wife, Liuba Soroka. The artist Stefaniia Shabatura is standing on the right. In the foreground is the poet Igor Kalinets. 1960s. Source: uma.lvivcenter.org 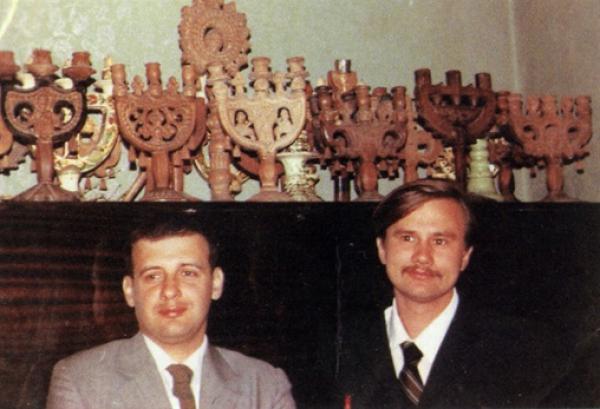 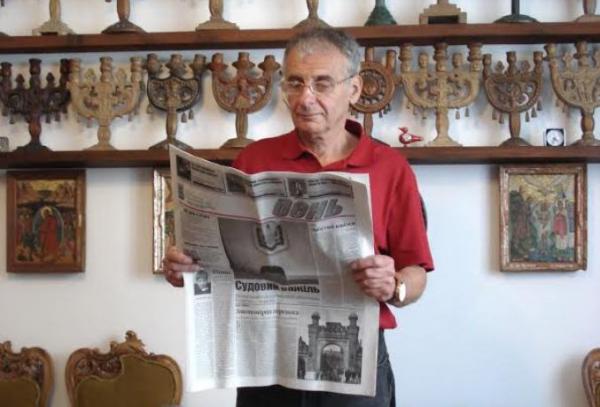 Bohdan Soroka against the background of his own collection of candlesticks. 2000s