Yevhen Lysyk was born on September 21 in the village of Shnyriv (now Lviv region, Brody district) in a peasant family. Less than a year after birth, he loses his mother; the boy is raised by his father and grandfather. Yevhen grew up in the nature of Brody, he inherited his grandfather’s love for horses, read many books. The People’s House (Narodnyi Dim), established with the assistance of the Prosvita Society, is active in the village: there is a reading room, a mandolin orchestra and an amateur theater, where Yevhen’s father plays in amateur performances. Hiding in the attic and watching theatrical miracles, the boy receives his first stage experience.

From an early age he shows artistic talent, which his father and grandfather encourage by buying pencils, paper, inexpensive paints. He likes to draw horses the most. In 1937, he begins school.


World War II ruins everything: years of struggle for existence and terrible pictures of the whirlwind of death will forever stay in the mind of the artist. After the war, Soviet power brought to the village new order, collectivization, and mass arrests. The Lysyk family also suffers a terrible fate: Uncle Ivan does not return from the camps, and his three children go through all the circles of hell. Staying in the village is becoming more and more dangerous. Striving to educate his gifted son, and at the same time "get lost" in the city, the father goes with Yevhen to Lviv. Without basic professional training, admission to an art school is impossible, so in 1947 the young man enters the Lviv School of Alfrei Works, where he both masters the profession and discovers the history of world art.


After graduating from school (1949) financial difficulties forced Yevhen to join the army. During his service in the Far East (1950–1953), he created his first scenery for amateur soldier performances in an army club.

After demobilization, he worked at the “Lvivsilmash” plant for some time, until he saw an announcement about the search for a worker in the decorative shop of the Lviv State Opera and Ballet Theater named after I. Franko, whose main artist was then the famous Fedor Nirod. That’s how Yevhen Lysyk gets to the legendary “painting workshop”. The loyal attitude of the management to the talented young man made it possible to work while studying at the institute, which becomes appropriate financial support.

In 1955 he enters the Lviv Polygraphic Institute named after I. Fedorov to the graphics department, which is unexpectedly closed in a year, but Yevhen was transferred to the Department of Monumental Painting at the Lviv State Institute of Applied and Decorative Arts (first as a candidate, and in six months on general rights — for academic success). Roman Selskyi, who is distinguished by his European education and deep knowledge of the theory of composition and color as well as the charismatic Ivan Skobalo teach here. Most of the teachers of the Institute, however, are hopelessly stuck in the school of Peredvizhiki.

Young Lysyk is looking for his own way in art; he does not accept both mindless copying and problem-free decorativism. He is fascinated by the drawings of senior student Eldar Efendijev, which are characterized by a constructive understanding of the anatomy of the human body, its architectural plasticity. Of the masters of past eras, Michelangelo is especially revered for his depth of images and the perfect sense of the human body. Lysyk is interested in the work of Mexican monumentalists, especially Siqueiros, whose paintings seem to destroy the plane of the wall, creating a breakthrough to another reality. Fascination with Picasso’s work began with clippings of magazine illustrations (behind the Iron Curtain, modern art was not only criticized in articles, but also illustrated with reproductions).


The search for a new plastic expression causes misunderstanding on the part of the Institute’s management, and, in 1960, Lysyk is expelled on a standard charge of formalism. Seeking to continue his art education, he tries to enter the Moscow State Academic Art Institute named after V. Surikov. In Moscow, a Lviv student is offered a second-year education, and this acts as a catalyst for Lviv: Lysyk is being reinstated at the institute at home.

In 1961, he defended his diploma and continued to work at the Opera House — as a production designer. During the year he presented his first independent work, solved in the style of constructive minimalism — the scenography of three ballets combined in one performance: “Glory to the Astronauts” by Yuri Biriukov, “Poem about a Negro” by George Gershwin, “Bolero” by Maurice Ravel. The performance was a great success.

The staging of A. Khachaturian’s ballet “Spartacus” in 1965 can be called a creative manifesto of the artist in theatrical art. The scenery here becomes a full participant in the musical and dancing action, and sometimes, even becomes a powerful core of its emotional and philosophical content.

In 1967, he held the position of chief artist of the Lviv Opera House.


The artist received real fame and recognition, he was invited to collaborate with theaters in Kyiv, Sverdlovsk, Chelyabinsk, Minsk, Leningrad. Several productions were staged abroad, including the ballets “The Legend of Love” (Yugoslavia, Turkey) and “Carmen Suite” (Poland).

In the performances decorated by Lysyk, the spectator seems to be transferred to another reality. Huge, fresco-like panels and intricate light scores become a whole with music and all theatrical action: a gothic cathedral rising to the heavens like a huge tree (“Esmeralda”), apocalyptic pictures of human suffering in the three circles of hell and silver-blue mourning “cosmic” Mother of God (“Creation of the World”) and other majestic images.

The life of some scenery, unfortunately, turned out to be short: in 1978, the Kyiv premiere of E. Stankovych’s folk opera “When the Fern Blooms” was banned: the brightly pronounced national theme frightened the Kyiv communists. A year earlier, after a brilliant premiere, E. Glebov’s ballet “Till Eulenspiegel” ceased to exist on the Leningrad stage. Kyiv decorations simply rotted on the street, in Leningrad, hundreds of square meters of painting, most likely, were simply destroyed.


In 1978, the Lviv Opera House was overhauled, and the performances were adapted by the troupe for a much smaller facility in the State Academic Drama Theater named after M. Zankovetska. For Yevhen Lysyk it means creative stagnation. But it was then that the artist received an invitation to the position of chief artist of the State Academic Bolshoi Opera and Ballet Theater of the Byelorussian SSR. Twice as big as the Lviv’s one, that stage opened up new opportunities for the artist’s unbridled talent, so Lysyk accepted the offer, while cultivating the dream of realizing the idea of a real mural in a big city. With his decorations in Minsk there appear modern performances: ballets “Till Eulenspiegel” by E. Glebov, “Creation of the World” by A. Petrov, “Spartacus” by A. Khachaturian, “The Nutcracker” by P. Tchaikovsky, as well as the opera “Giordano Bruno” by S. Cortez.

In 1980, the news of the death of his father came, and the artist returned to Lviv.


In 1982, he returned to work at the newly opened Lviv Opera House after renovation. The first performance after a three-year break — the ballet “Medea” by R. Gabichvadze, staged in collaboration with the prominent Belarusian choreographer S. Drechin — raises the artist’s work to a new level.

The images of the 1980s embodied all the experience and depth of the master’s worldview. Along with new productions (the opera “War and Peace” and the ballet “Romeo and Juliet” by S. Prokofiev, ballets “Swan Lake” and “The Nutcracker” by P. Tchaikovsky), after a major reconstruction appear in different “sounding” the scenery of ballets “Creation of the World” by A. Petrov and “Esmeralda” by C. Pugni. And the last scenographic version of the ballet “Spartacus” (1987) — the performance from which Lysyk’s creative rise began — as if embodied his life credo: the pursuit of spiritual freedom as the highest goal, as the meaning of life.

In recent years, the artist desires to leave work in the theater to be able to embody his ideas in more durable materials. He teaches at the newly created Faculty of Monumental Painting of the Lviv State Institute of Applied and Decorative Arts, at the invitation of Rector E. Mysko. In 1989, he traveled to Spain, where he finally saw live the works of his favorite masters — Velazquez, Goya, El Greco, Picasso.


As part of a delegation of theatrical figures, he visits the United States, where he gives lectures on scenography to students of specialized faculties.

The last premiere of Yevhen Lysyk, J. Verdi’s “Othello,” takes place in Lviv on July 27. The scenography of the play seems to be full of a premonition of the inevitable: deserted spaces, rigid architecture, terribly open skies…


On May 4, Yevhen Lysyk dies in Lviv. Buried in Field № 67 of Lychakiv cemetery.

The artistic heritage of the master is not limited to scenography: a significant layer of his works consists of graphics and painting. The artist never published his beyond-the--theater works — they were his own, purely personal reflections. However, the extraordinary artistic quality of his works, the variety of themes, plots, motifs, portraits — define this area of his creativity not as secondary, but as original, self-sufficient, equivalent to the public work of the artist. 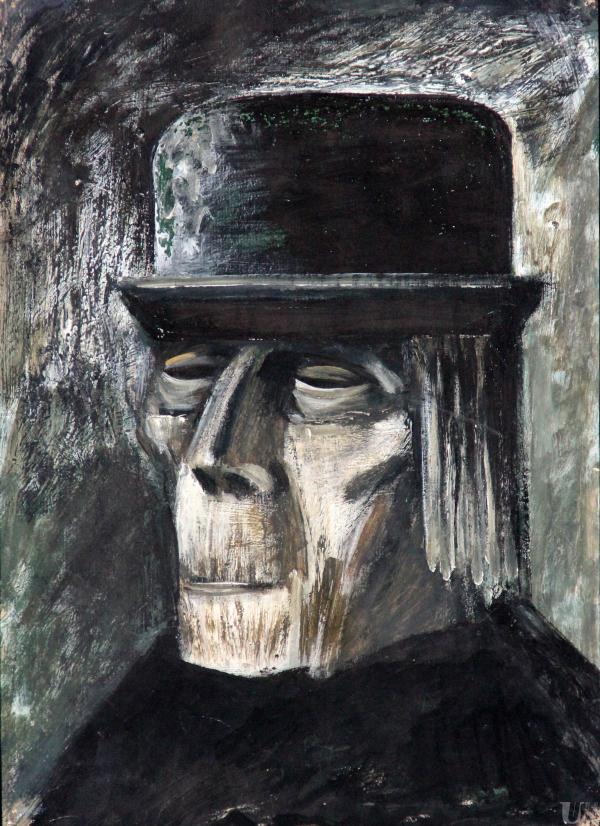 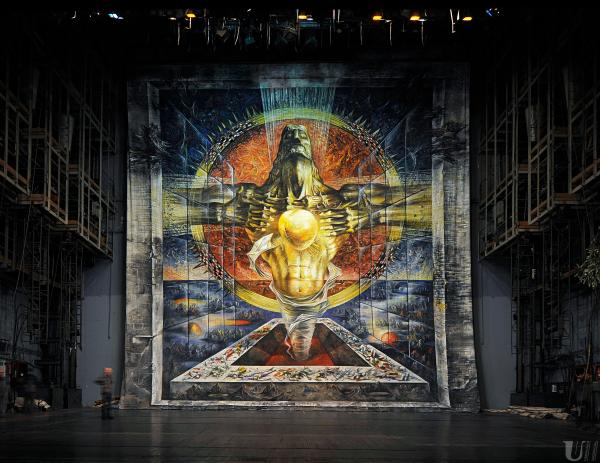 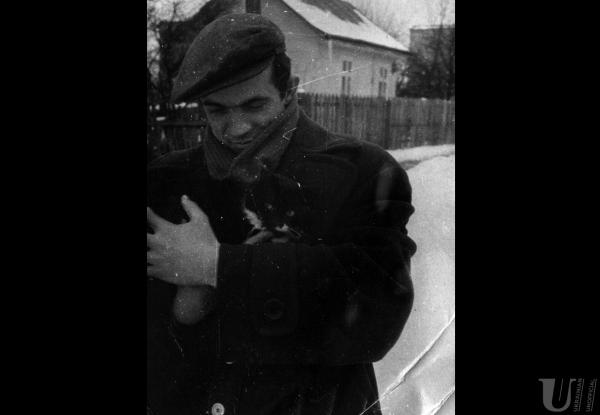 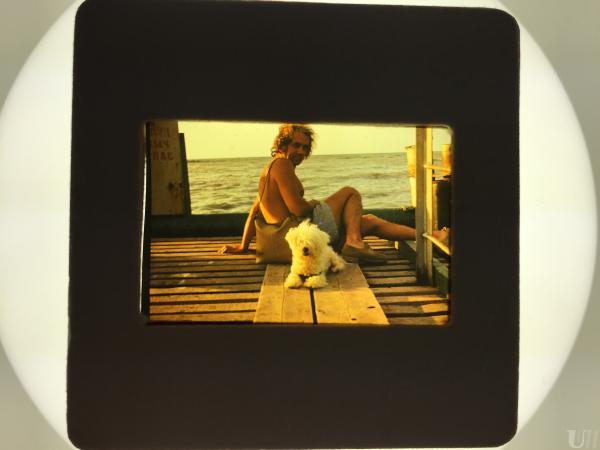 Yevhen Lysyk on vacation in Dzhubga. 1976 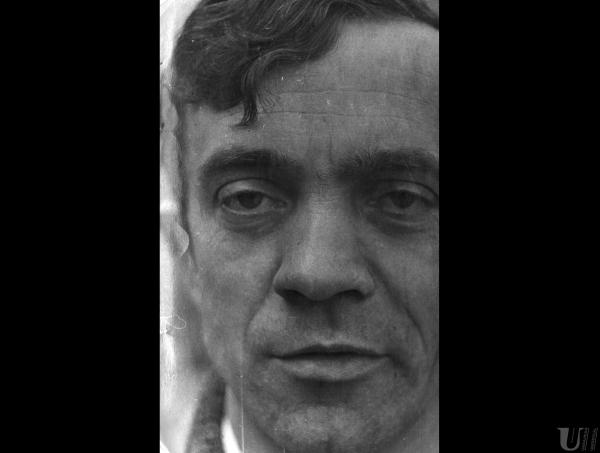 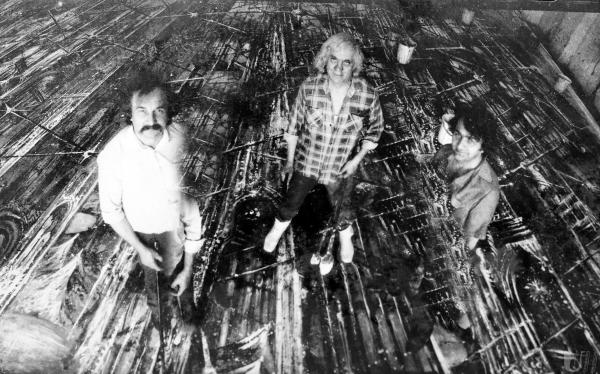