Born on January 4 in Kharkiv. After the death of his father (immediately after the war) he was brought up in the house of his uncle, Serhiy Hryhoriev, together with his cousins Halyna and Maya. The children grew up in the special creative atmosphere that reigned in the family.


Studied at the Department of Painting of the Kyiv State Art Institute (workshop of S. Hryhoriev). His thesis work was the painting “Pilots”, which was preceded by other significant paintings “On Elba. 1945” (1957) and the “Weimar Spring” (1958). The former earned the artist a broze medal at the all-Union exhibition dedicated to the 6th World Festival of Youth and Students (Moscow, 1957). After finishing the institute with great results, he becomes Serhiy Hryhoriev’s assistant at the Creative Workshops of the Soviet Academy of Arts, where he taught drawing. That was where he became infatuated with printmaking, masters etching and monotyping.


Becomes a member of the Artists' Union of the Ukrainian SSR.


Creates the paintings “The Walk. Valya and Valentyn”, “Neighbor’s Yard. Ambulance.” Despite the emphasized relevancy of the topic and the use of brave, almost cinematographic angles, this, and other paintings of the artist stand out with their perfect composition, precise drawing, and the perfection of their color solutions. Yakym Levych, a close friend of the artist would soon write: “...Ihor was a master, who meets the way of thinking of the current day, because during that time, a kind of ideal for us was Impressionism, Post-Impressionism. If the artists would dive deep into something, it was mostly in the so-called “left” approaches. But he wasn’t into this, he always started with an image, and in this he was unlike any of us. Back then, we thought this a shift to the right, but now I don’t think so, more like vice versa: this is what protected him somewhat from the provincial modernism. Modernism is a good cause, but the provincial variant of modernism is rather disgusting.”


Takes part in the 2nd All-Union Art Exhibition “Physical Culture and Sport in Visual Art”, where he exhibited his painting “Boys” (1967). This topic was later reflected in other great works of the artist: “Fencing Team”, “Sportsman and Coach” (both 1971). Starts working on the picture “Legend of Kyiv Football”, which was dedicated to the tragic 1942 game between the Ukrainian and German football teams. The painting was finished in 1976.


After a long break, he takes part in the annual republican and all-Union art exhibitions which were held in Kyiv, Zhdanov (now Mariupol), and Moscow.


Creates a series of surrealistic prints which depict fantastic insects, fish, and other bizarre creatures. Later, Halyna Hryhoryeva would write about her father’s reaction to the paintings: “Surrealism disgusted Serhiy Oleksiyovych because it reflected the dark side of the soul, demonstrating the ugly and the physiologic (there’s something similar in Aztec art), but Ihor didn’t hide the works, his friends saw them in the workshop. Of course, he couldn’t exhibit the works in public.” Yakym Levych calls the paintings a key to the artist’s works: “When there’s no depiction of a person, Ihor’s grotesk and irony disappear, and something sullen is introduced, which is hard to convey with worlds. If he’d lived for some more, maybe he would’ve developed this approach.”


Paints in the workshop on Perspektyvna Str., near Mykhail Vainshtein and Vladyslav Mamsikov. The latter reminiscences: “We didn’t just use to work together, we also spent our free time. We gathered at Valentyn Reunov’s place on Andriivskyi Uzviz, he was one of the first artists to make that abandoned place habitable. Together with Ihor Hryhoriev, we often went have picnics on the riverside near Pripyat, the construction of the Chornobyl Nuclear Power Plant was underway nearby…” Maybe, these trips inspired the artist to create the drawing series “Chornobyl NPP” (1973). He creates a number of pictures on the topic of production: “Construction” (1973-1975), “Third Shift” (1975), “Earthworks” (1976). Among the other noteworthy works the author made during this period are the “Excursion” (1971), “I Was 10 Years Old At the Time” (1974), “Amber of the Baltic” (1975), “Marathon Runner” (1976). 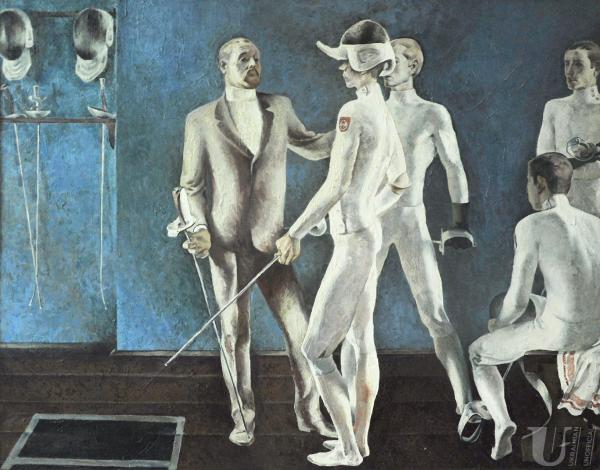 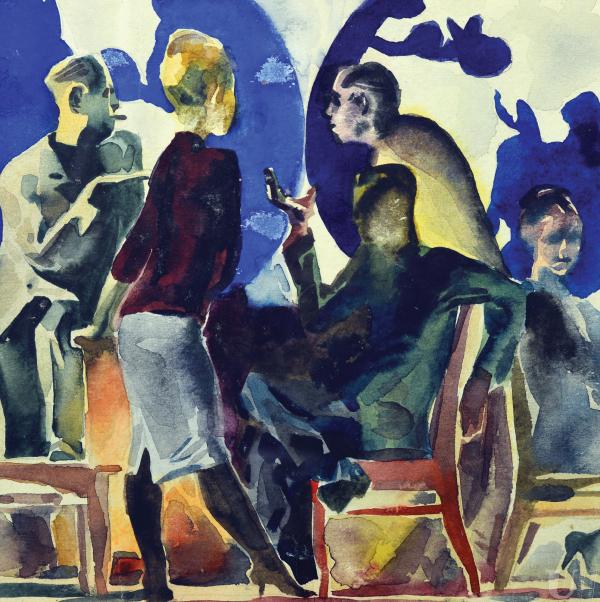 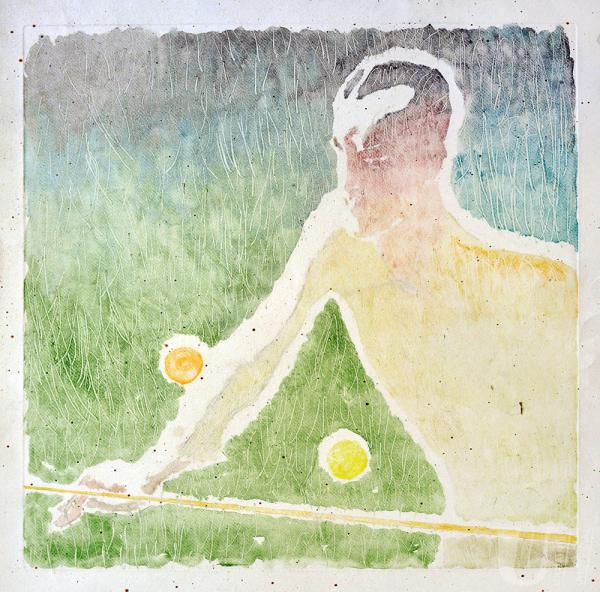 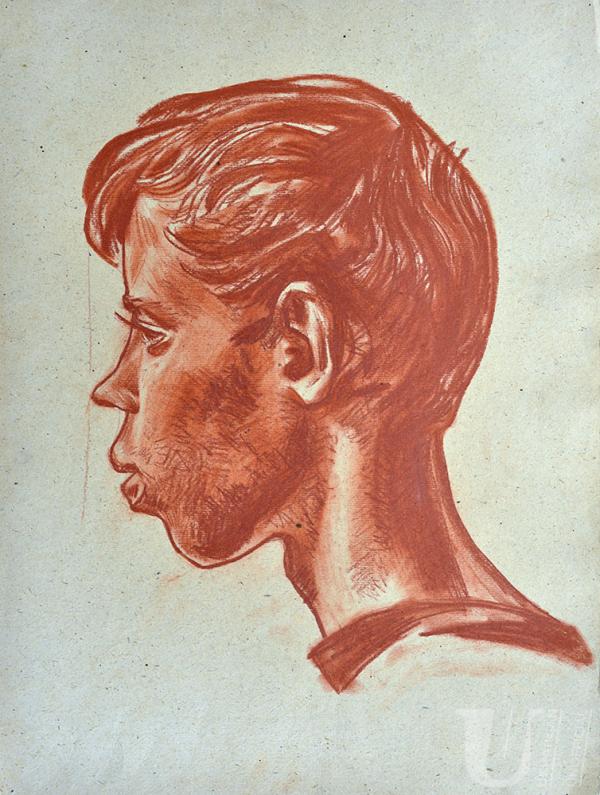 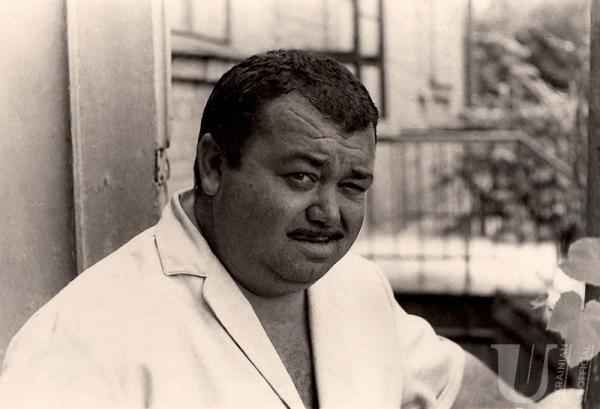 In the workshop on the Filatova Street. 1970s 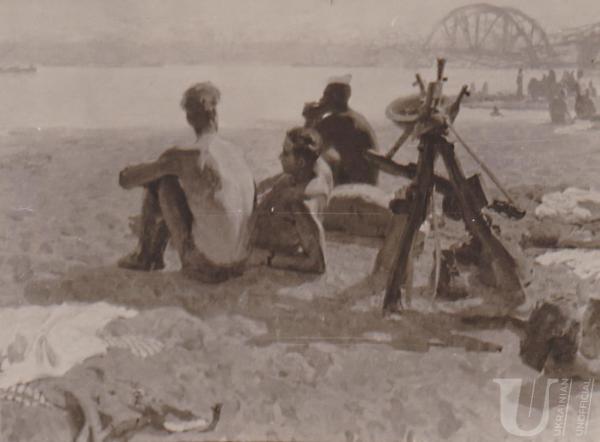 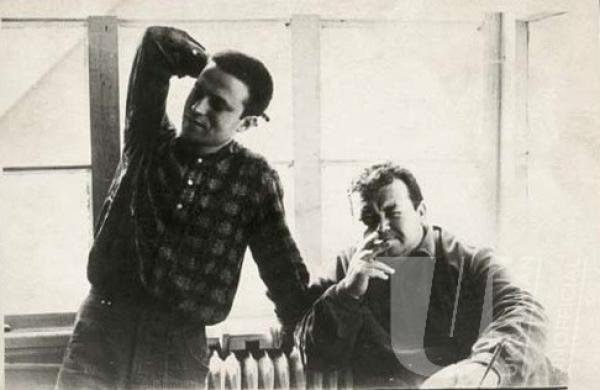 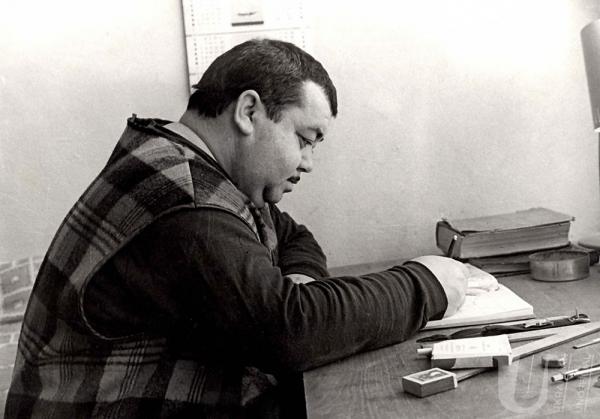