She was born on September 18 in Yalta. Her father Oleksandr Horskyi was one of the pioneers of the Soviet film production. He held the post of director of the Yalta Film Studio for nearly a year, then he became head of the “Lenfilm” Cinema Company. Her mother Olena Bezsmertna worked as a daycare worker in the children’s sanatoriums in Yalta, later on she became costume designer in Leningrad.


The life of a privileged family with strong cultural traditions was violated by war. After two years of blockade Alla with her mother were evacuated to Alma-Ata, where her father had already worked at that time. At the end of 1943 he got an offer to become the head of Kyiv Feature Film studio (today’s Oleksandr Dovzhenko National Film Studio), and the family moved to just liberated Kyiv.


She studied in the Taras Shevchenko State Art School from which she graduated with a gold medal. Among her art instructors were Volodymyr Bondarenko, the former student of Fedir Krychevskyi. It was he who instigated awakening of the national self-awareness of his students, while sowing in them “the first seeds of self-dignity” (Halyna Zubchenko).


She studied in the Kyiv State Art Institute, inter alia in the art studio of Serhii Hryhoriev. Her diploma painting was “Pioneer Control”, created within the traditions of Soviet social realism. In 1954 the painting was exposed at the 3rd All-Union exhibition of diploma works of students of art schools of the USSR, and the next year it was reproduced on the leaflets that were published in a mass edition.

In 1952 she got married with the young teacher at the Kyiv State Art Institute Viktor Zaretsky, who would soon become a prominent Ukrainian artist.


After graduation from the Institute, she actively participated in the art life of the state. Thus, her works were exhibited (in 1957 alone they were exposed at three exhibitions, inter alia at the International Exhibition of Fine and Applied Arts, presented within the framework of the 6th World Festival of Youth and Students in Moscow). She also carried out the orders of the Ministry of Culture of the USSR (in 1957 she made her painting “My Donbass”, and in 1959 — the group portrait of the P. Polshchikov brigade of the communist labor.

Together with her husband she lived and worked in Donbass for a long time, where she created a number of easel and monumental paintings on the labor topic.


She entered the Artists’ Union of the USSR.


She pained “Self-Portrait with Son” (currently kept in the National Art Museum of Ukraine), in which through the realistic manner, characteristic for her early artistic years, one could already distinguish first traces of a new, decorative style.


She worked in the village of Hornostaipil in Chornobyl (current Ivankiv) District, Kyiv Region. According to her son, Oleksii Zaretskyi, that was the time when she “definitely found her imaginative language – not only its artistic component, but also its vital emotional dimension” . This assertion was validated by her paintings “Portrait of a Kolkhoz Woman”, ‘Geese”, “Prypiat. Ferry” (all dated from 1961).

Bold elongated compositions, monumental forms, concordantly arranged on the picture plane, sounding coloring (that was almost for the first time when the artist applied tempera style of painting that would become her favorite painting technique in the future) witnessed the birth of a new phenomenon in Ukrainian art, which contradicted official canons of social realism.


Together with Les Taniuk, Vasyl Symonenko, Ivan Svitlychnyi, Evhen Sverstiuk, Ivan Dziuba and other representatives of new Ukrainian intelligentsia (among the artists one should name Viktor Zaretskyi, Opanas Zalyvakha, Halyna Sevruk and Liudmyla Semykina) she became an organizer and an active participant in the Club of Creative Youth “The Contemporary”. She created portraits of most of her like-minded fellows (in the technique of tempera, gouache, and linocut). She also referred to the images of great forerunners, such as Anatol Petrytskyi, whose oeuvre at that time was particularly consonant to a stylistic quest of Horska herself.


She painted her works “Bread” and “ABC”, in which the formal findings of her previous artistic works were combined with expressive ethnical motives.


Together with her husband she travelled across Central Asia, visiting Samarkand, Bukhara, Urgench. The trip resulted in numerous pencil drawings and esquisses, performed in watercolor and tempera technique.


Together with Opanas Zalyvakha, Liudmyla Semykina, Halyna Sevruk, and Halyna Zubchenko she made esquisses and the prototype of a stained glass window “Shevchenko. Mother” for the foyer of the Red Building of the Taras Shevchenko National University of Kyiv. With the tacit content of the party leadership, administration of the University destroyed the “ideologically hostile” stained glass just after its assemblage. The only result of their quest for truth, as well as their attempts to defend their rights, was exclusion of Horska and Semykina from the Artists’ Union of the USSR.


After the wave of arrests of her friends and like-minded fellows (Opanas Zalyvakha, Bohdan and Mykhailo Horyn, Viacheslav Chornovil, Valentyn Moroz) Horska became actively involved into the human rights movement by not merely supporting it, but in many cases by initiating its resolutions.

The Artists’ Union of the USSR resumed Horska’s membership.

Together with Hryhorii Synytsia and Halyna Zubchenko (with the involvement of Ivan Kulyk and Oleksandr Korovai) she created 8 mosaic panels for the experimental school No. 5 in Donetsk: “Life”, “Fire”, “Cosmos”, “Air”, “Earth”, “Sun”, “Subsoil”, ‘Water”.


Being part of the art groups, which also included Hryhorii Synytsia, Halyna Zubchenko, Viktor Zaretskyi, Borys Plaksii and some others, she participated in creation of a number of monumental art works. In 1967 alone there were created mosaic panels “Tree of life” and “Windhover” (Mariupol, café “Ukraine”), “Wind” (Kyiv, restaurant “The Mill”), and murals for Kyiv restaurants “The Mill” and “Poltava”.


Together with Viktor Zaretskyi, Borys Plaksii, Oleksandr Smyrnov, Volodymyr Smyrnov, and Anatolii Lymariev who joined the group after a while, she started her work on the mosaic panel “The Victory Banner” for the “Moloda Hvardiia” (“Young Guard”) Museum in Krasnodon (today’s Sorokyne). Lesia Smyrna pointed out the key features of the following art work that became a true milestone in the history of modern Ukrainian monumental art (all these features are related to the interpretation of color): heightened contrast, ecstatic tension, predominance of pure local colors.

In the same year Hosrka would be excluded from the Artists’ Union of the USSR for the second time, for the reason of her human rights activities. Thus, she supported the letter of protest of 139 merited figures of science and art, aimed against unlawful arrests and closed-door trials of the dissidents.


The last monumental work of Alla Hoska became a small-scale mosaique “The Bird”, created in cooperation with Viktor Zaretskyi on the fronton of “Supii” restaurant in Helmiaziv village of Cherkasy Region.

On November 28 she tragically perished in Vasylkiv under unclear circumstances. 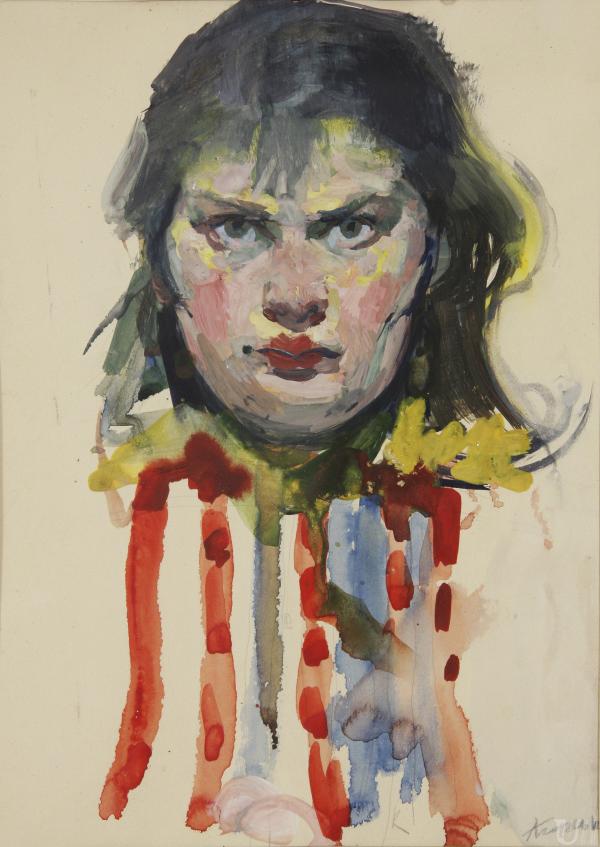 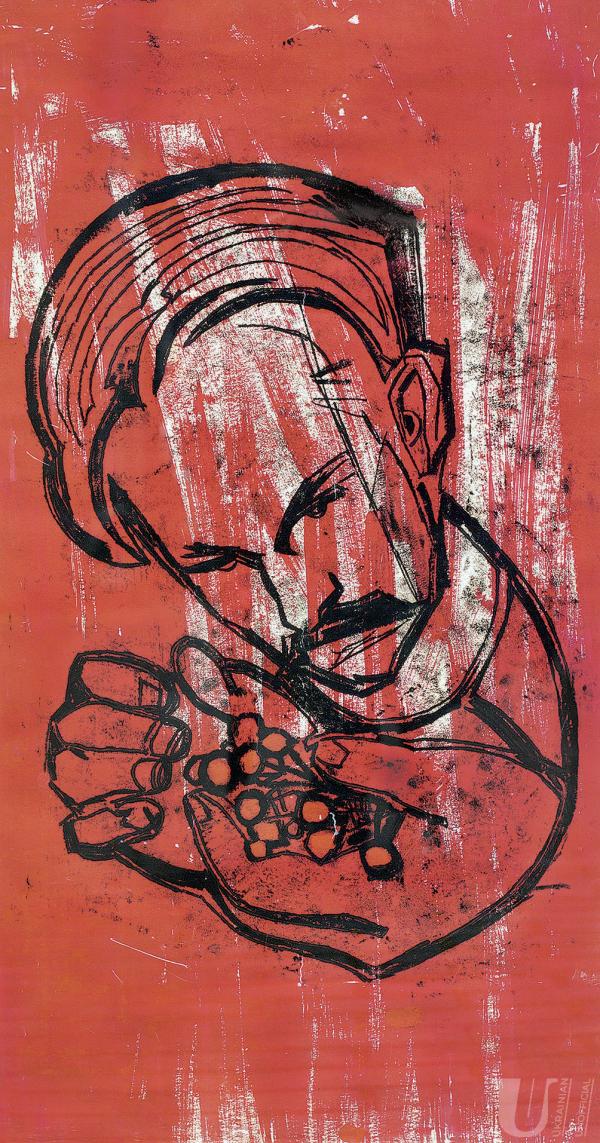 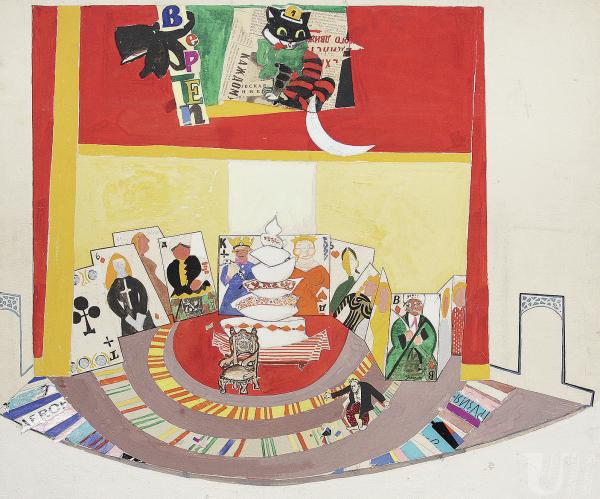 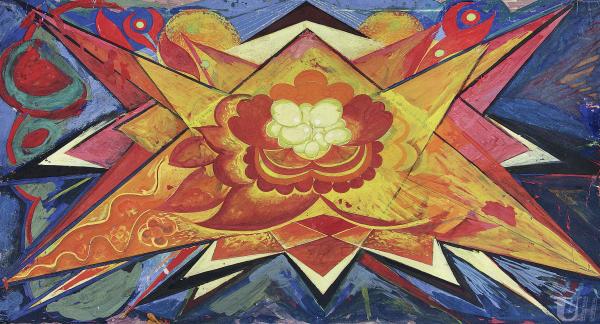 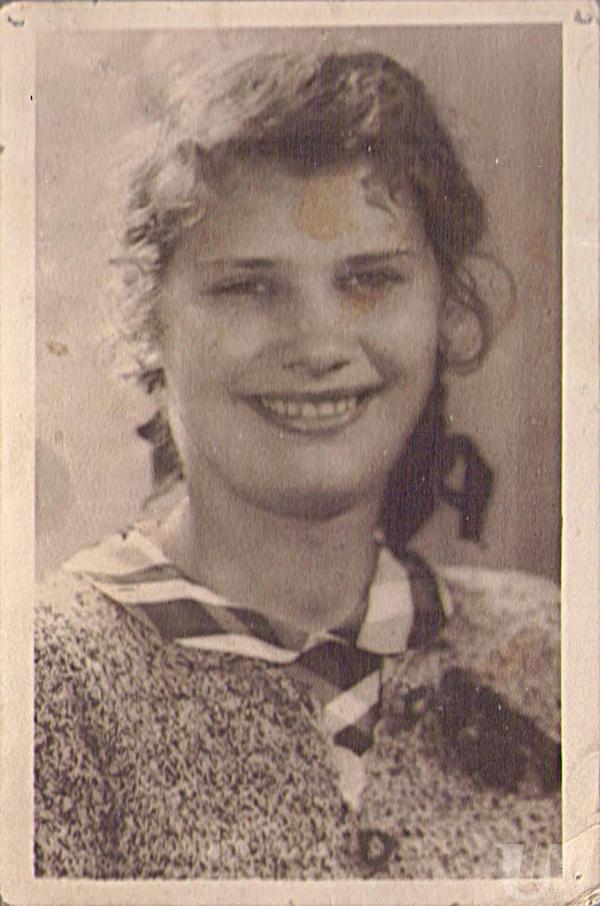 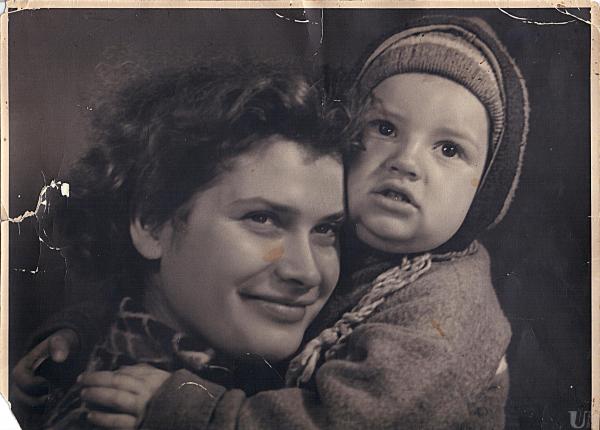 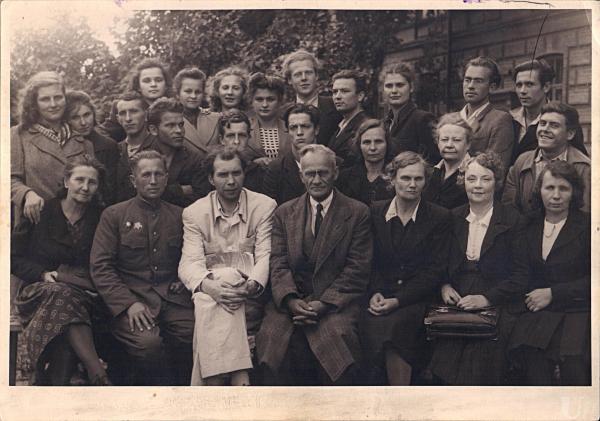 Pupils and teachers of Taras Shevchenko Kyiv Art School. Among those present: Alla Horska (third from right in the top row), Hryhoriy Havrilenko (on her right), Hennadiy Poliovyi and Volodymyr Kutkin (in center from second row). [1946–1948] 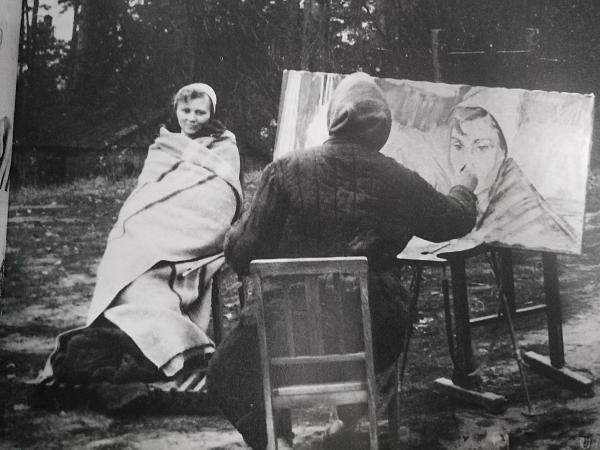 Alla Horska paints a portrait of Liudmyla Semykina. The mid-1960s