He was born on March 6 in the city of Lebedyn in Sumy region.


His parents divorce, his mother with her daughter travels to Moscow, where she soon dies. Valerii is left with his father and stepmother, since his early years he becomes self-dependent and responsible, reads a lot, takes an interest in art and philosophy.


Enrolls in the Voroshilovgrad State Art College, his studying there will be disrupted by the war.


He is used as a forced labor worker in Germany. Despite the extreme living conditions, this period turned out to be very important for the artist’s spiritual development. Thanks to his knowledge of German language, he gets acquainted with the works of Hegel, Kant, Schopenhauer, which he finds in some ruins after a bombing run. Soon, Alina Lamakh would write: “Being bereft of the most fundamental living conditions, exhausting labor, hunger, cold — everything connected to the perception of the external on a physical, material level of life, could be compensated for only with an escape to another world — the spiritual world, in order to survive in the real one. Diving into one’s own internal feelings of even an impossible, illusive dream, not leaving any place for the thoughts about the external side of the hard life”1.

That’s when the idea of the central category of Lamakh’s philosophy was conceived, the “Circle of eternal return.” This is how the artist remembers it: “The circle of eternal return was born in the tough wartime, and it stood at the beginning of the life’s ascent. The main pathos was in a personal attitude to everything, in the awareness of being a part of the Universe. <...> Faith in the eternity of the moment, in providence, in noncoincidence took root and remained on a depth untouched by time for my entire life”2.


Lives in a camp for displaced people in the US occupation zone near Cologne: “I paint colossal portraits: Stalin, Roosevelt, Churchill. They decorate our camp,” the artist wrote3.

Returns to Voroshilovgrad, where he resumes his studies at art school in the fourth year.


Finishes studying at the Art College.

Meets his future wife Alina, who studied at the same college.


Studies at the Kyiv State Art Institute. However, not everything goes as he wants it: instead of the painting department, he is accepted to the drawing department, and after the third year he get assigned to not the easel workshop, but to the poster one, headed by Vasyl Kasiian.


Actively works on posters. Among his first posters printed back during his years of studying at the institute are: “High yields are the country’s power. Glory to the people who grew them!” (publishing house “Mystetstvo”, 1952), “Let’s give the country more sugar beets!” (Derzhsilhospvydav, 1953), “We revere the country with our labor” (thesis work, publishing house “Mystetstvo”, 1954). In general, Lamakh’s posters aren’t much different from the political poster production of the time in content and form, however, the artist, with his philosophical approach to live finds a way to rationalize: “I understood that the modern poster can play the role of an icon. This didn’t just set me at peace with the poster, but I came to love it as a form of art most close to me, monumental art. Even if a poster hangs in a room, it introduces with itself a sense of a vast space. This is the freshness and infinity of a poster”4.

He takes part in republican, all-Union, and international poster exhibitions.


Becomes a member of the Artists’ Union of the Ukrainian SSR.


Works as a senior editor at the State Publishing House of Visual Art and Musical Literature of the Ukrainian SSR.


The album “Ukrainian Soviet Poster. 1917–1957” (compiled by B. Butnyk-Siverskyi), which included 9 posters by Lamakh.


Actively works in monumental art, gets commissions to decorate the interiors and exteriors of public buildings. One of the first one was “Friendship of Peoples” mural in the lobby of the central pavilion of the Exhibition of Achievements of the National Economy of Ukrainian SSR in Kyiv (in collaboration with I. Lytovchenko, I. Skobalo, and I. Tykhyi).


Together with E. Kotkov and O. Semenko he works on the triptych “Reunion” (tempera mural) for the exhibition “Soviet Ukraine” in the framework of the Decade of Ukrainian Literature and Art in Moscow.


In collaboration with E. Kotkov and I. Lytovchenko, he creates decorative panel in the interiors of the Kyiv River Port, in particular the “Seagulls over the water” (vestibule), “Dnieper the trade route”, “Bohdan Khmelnytskyi”, “October” (waiting hall), “Ukraine”, “Labor”, “Rest” (restaurant); makes sgraffito works, and decorates a facade (engraved contour, Inkerman limestone).

Creates several abstract compositions. In the opinion of Tetiana Kochubynska, “his experiments with the abstract and his activities in the domain of the official Soviet art did not contradict each other thanks to the holistic nature of the artist's worldview and his understanding of his own artistic experience as indivisible”5.


In cooperation with O. Kishchenko and I. Lytovchenko, he creates a ceramic mosaic “Socialistic Industry” for the all-Union art exhibition in Moscow.


Works as a poster editor at the “Mystetstvo” publishing house.


In collaboration with E. Kotkov and I. Lytovchenko decorates the facade and interiors of the main building of the Institute of Plant Physiology and Genetics of the Academy of Sciences of the Ukrainian SSR in Kyiv.


Together with E. Kotkov he decorates two halls of the restaurant "Metro" on Khreshchatyk Street.


Together with E. Kotkov and I. Lytovchenko he creates decorative panel works in the Boryspil Airport, including the “Icarus” (waiting hall), and “Peace, Labor, Happiness” (vestibule).


Together with E. Kotkov and I. Lytovchenko, he decorates the interior and exterior of the Iskra Palace of Culture of the Zhdaniv Heavy Industry Factory (now Azovmash, Mariupol).


Together with E. Kotkov he decorates the interior and exterior of the mineral water drinking gallery № 4 in Yessentuki.


In cooperation with E. Kotkov he creates the mosaic panel work “Symphony of Labor” on the side wall of the apartment building number 21 on Brest-Lytovske Highway in Kyiv (now Peremohy Avenue).


Together with E. Kotkov he works on the design of the Khimik Palace of Culture in Dneprodzerzhinsk (now Kamianske). He created panel work “To the Sun” (front wall of the stage box), tempera painting “Life” (second floor foyer), decorative plate near the fountains, as well as the “Figure Skaters” mosaic on the front wall of an adjacent cafe.


He works on “Books of Schemes”, where he records his own philosophical concept of the world, life, creativity. Lamakh devoted 33 years of his life to reflection on the idea of the circle as a scheme, the key to this concept, and only in 1969 began recording them. About the circumstances under which this happened, Alina Lamakh wrote: “And the book of schemes, the “circle of signs” — was created in an atmosphere of interest to it from Lamakh’s friends. And it was not written as a book. No thought to make a book and publish it. Lamakh taught his new thoughts to his friends. He was interested in receiving feedback from them. I think the listeners were also interested. These were like-minded friends who had been sharing ideas and communication for a long time. Reading the schemes texts was fruitful and lively. It sparked new thoughts, supported Lamakh’s creativity. Similarly were created the second, third and fourth books of schemes. There was understanding and lack of any conflict. The author continued to supplement each of these books with new material”6. Among the like-minded friends of Lamakh’s let’s name Hryhorii Havrylenko, Vilen Barskyi, Florian Yuriev, Anatolii Lymariev, Yakym Levych, Hanna Zavarova, Borys Lobanovskyi, Hennadii Aihi, Ihor Blazhkov, Valentyn Sylvestrov. The words of the latter convey the impression of the readings of Lamakh: “This man seemed to show us the manifestation and reality of the spiritual world. It seems that the whole world became a Book for him, and he could read it, and the happiness of this "reading" passed on to us, his friends, and for the for now few witnesses of the triumph of the embodiment of reality in our then poor and closed society”7.


Decorates the interiors of the buildings of the Tambov Chemical Combine (now the Pigment factory): smalti mosaics “In the Name of Life” (conference room), “Summer” (food block); brass painted panels “Space” and “Art” (Palace of Culture of the chemical plant).


Teaches drawing, painting, and composition at the Kyiv Evening Department of the Fedorov Lviv Polygraphic Institute (associate professor of Book Design and Illustration).


Takes part in the teaching thematic conference with the report “Introduction to the Works of I. Yu. Repin”, which started the last, the fifth book of schemes of Valerii Lamakh. 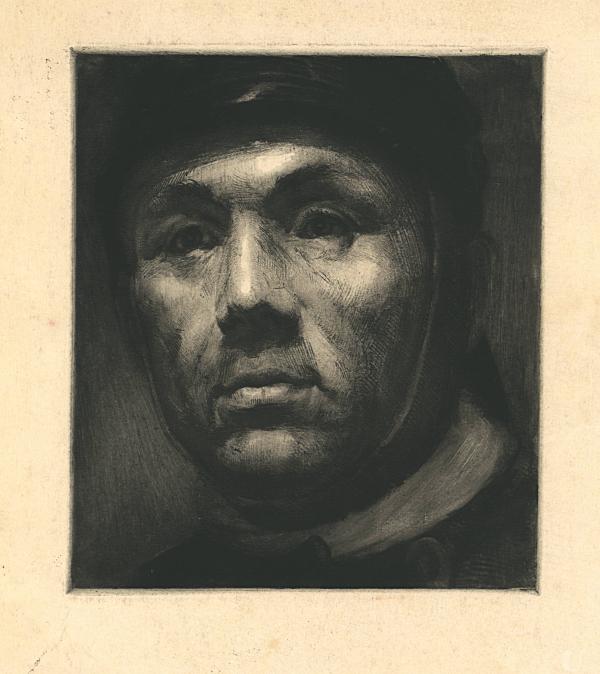 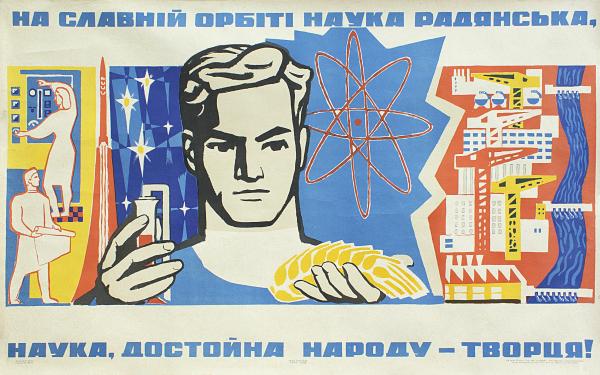 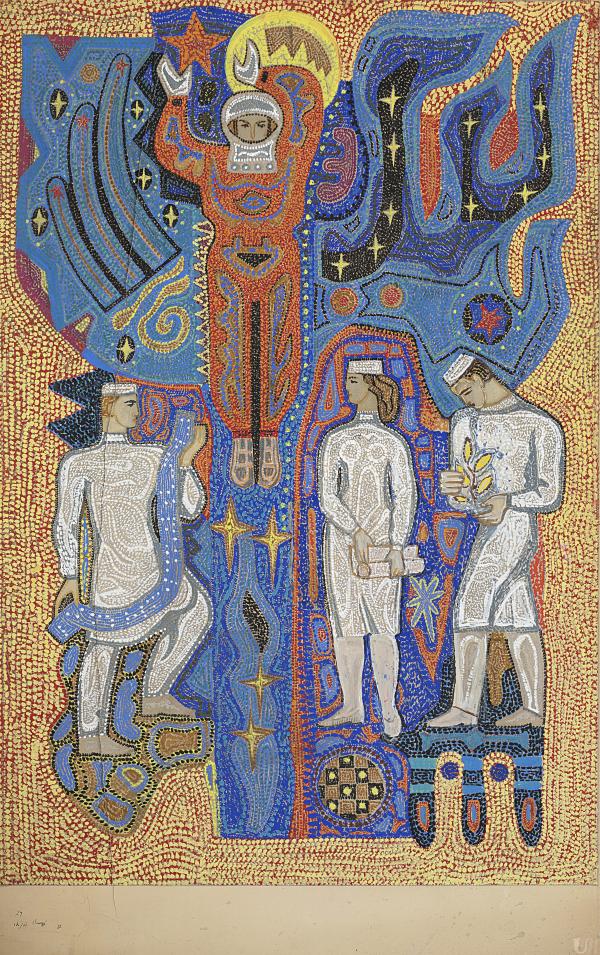 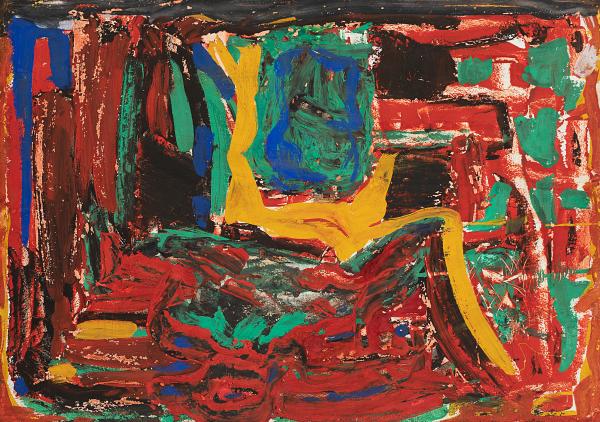 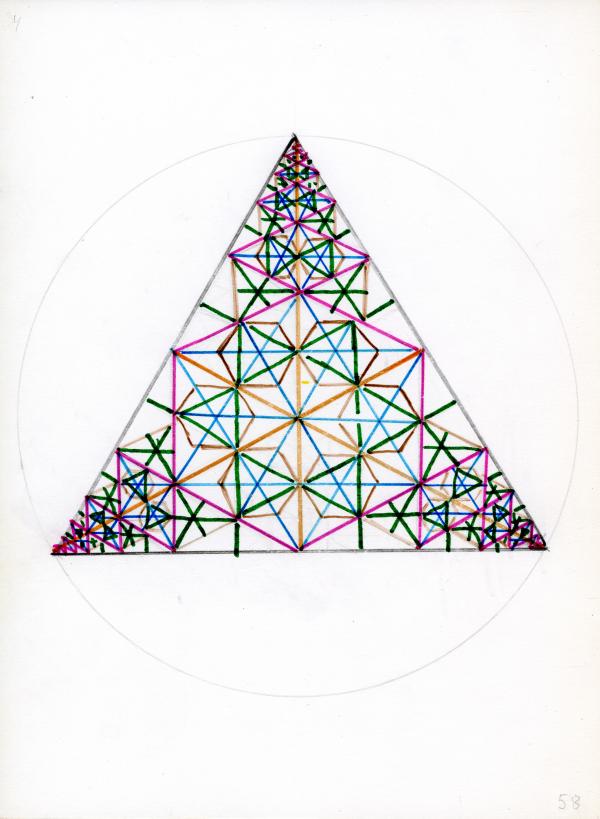 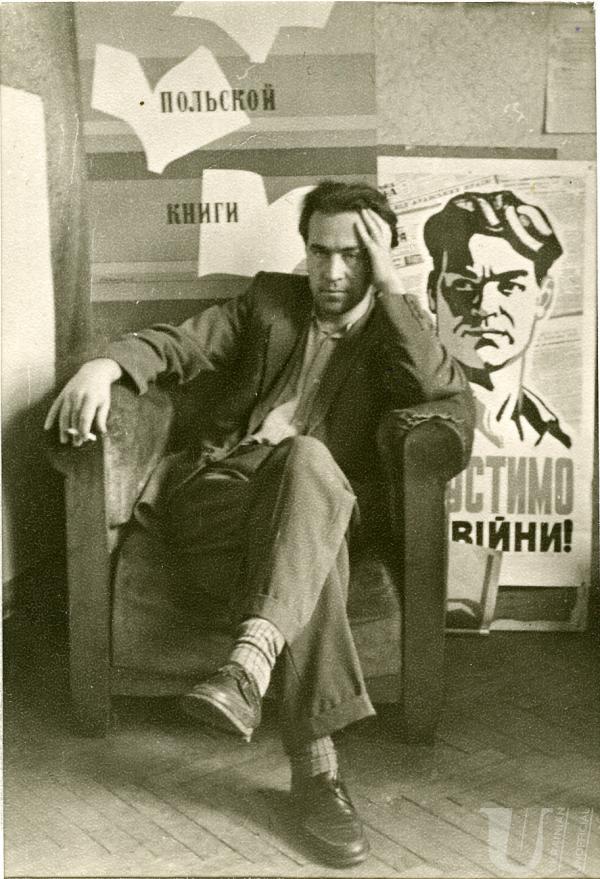 Valerii Lamakh, Heorhii Yakutovych and an unknown person near the entrance of the Kyiv State Art Institute. [1948–1954] 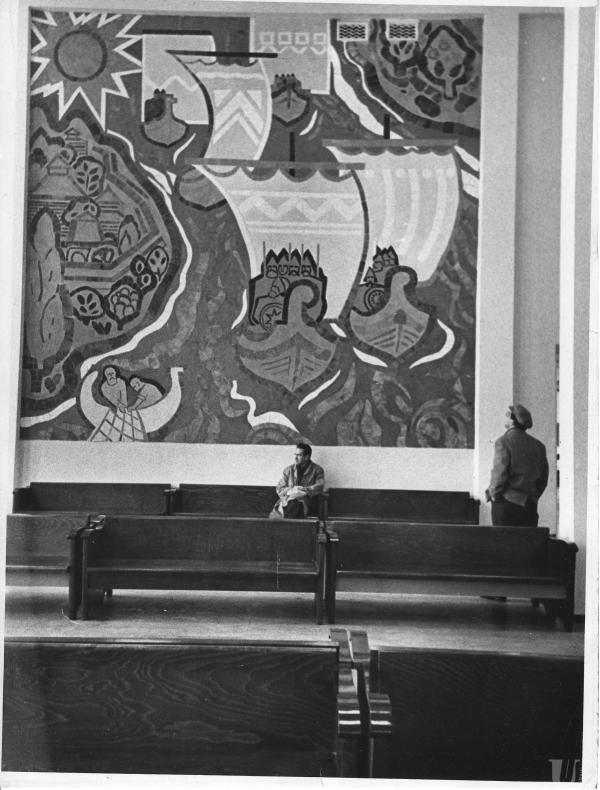 Ernest Kotkov and Valerii Lamakh near the ceramic panel “Dnieper the Trade Route” in the waiting hall of the Kyiv River Port. [1959–1961] 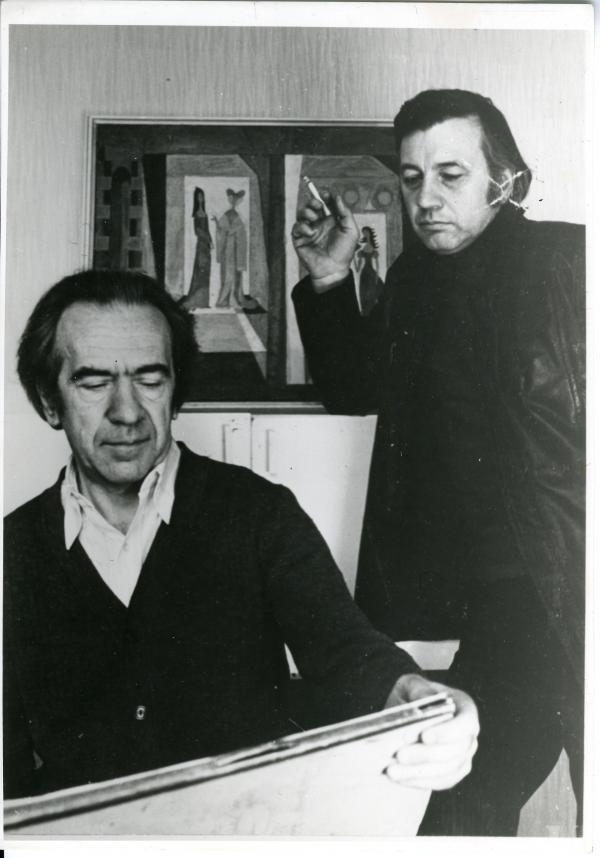