He was born on 6 October in the Pasika farm of Hrubieszów County of Lublin Voivodeship in Poland. His parents, Yakym Hrytsiuk and Kateryna Hapon, are descendants of Ukrainians from Lutsk. The family was poor, led a traditional peasant lifestyle.


The Hrytsiuks leave for Argentina and settle in the suburb of Buenos Aires, in a house they purchased with money they brought with them. The father works as a watchman at a weaving factory, in his spare time he makes cloth on the loom at home, in which he is assisted by his wife and children (aside Mykhailo they have another son and two daughters).


Mykhailo has to start working at a cardboard factory while attending a Spanish school.


He enrolls in a flight school, but quits his studies due to poor health and gets employed at a paper mill. He starts attending the painting department at an evening art school (in the last year he gets transferred to the sculpture department).


He often visits the workshop of the prominent sculptor Stepan Erzia, who at the time was living and working in Buenos Aires, to study and analyze his works.


Due to an unwavering interest in the events transpiring in his homeland, he accepts Soviet citizenship and engages in activism.


Receives the third place at the competition of young Argentine painters. He works as a painter at the USSR Trade Office and the Soviet Embassy in Argentina. Together with two other immigrant artists, he organizes a decorative painting workshop to fulfill the local people's orders. He becomes a non-degree student at the Institute of Plastic Arts, where he has makes considerable progress in his studies.


The Hrytsiuk family decides to return home. Along the way, Mykhailo visits Rome, lives in Vienna for several months, eagerly absorbing the impressions of the city and its museums. In Ukraine, the family stops in Kivertsi near Lutsk and subsequently gets an apartment in Lutsk.

Makes an unsuccessful attempt to join the Kyiv State Art Institute. Without hesitation, he submits documents to the Taras Shevchenko Kyiv Art School, enters the eleventh grade and attends classes with students much younger than himself.


He studies at the sculpture department of the Kyiv State Art Institute. Among his teachers are Mykhailo Lysenko and Ivan Makohon, whose lessons Mykhailo will remember with particular warmth. Despite the experience gained in Argentina, in the Institute, has to return to the traditional tasks requiring knowledge of anatomy, working with nature and so on.

He goes through a difficult period of mental struggle triggered by new, partly negative impressions of Soviet society. In a letter to his beloved Adriana, whom Michael left in Argentina, he wrote, “Only here, in this country, have I realized what suffering is and what life is”.

Hrytsiuk’s diploma work is the sculpture “Fisherman”, a carefully executed, but deprived of an original approach to the theme and its plastic interpretation that is fully consistent with the canons of Ukrainian Soviet art of that time.


Together with Yuliy Synkevych and Anatolii Fuzhenko, he wins an all-Union competition for the Taras Shevchenko monument in Moscow. The young, little-known sculptors managed to recreate one of the most convincing images of the poet in monumental sculpture. Two years later, the grand opening of the monument with the participation of Nikita Khrushchev and other statesmen and cultural figures takes place.


Becomes a member of the Artist’s Union of the Ukrainian SSR, starts taking part in exhibitions.


He pays increasingly more attention to easel sculpture, looking for a new manner of expression to fulfill his own themes and images. In the portraits of his wife, Ernest Hemingway, Serhii Paradzhanov, and others, the author does not yet dare to depart from the traditional approach to volume and take a decisive step towards the emphasized expression characteristic of his works made over the next decade.

In cooperation with Yu. Synkevych, he creates a monument to the three assaults on Perekop, a project of a monument to commemorate the reunification of the Ukrainian people in a united Ukrainian state, a decorative bas-relief for the Lybid Hotel in Kyiv, as well as the bust of Nikolai Ge, erected on his grave in Shevchenka village in Chernihiv region.


One of the first easel works where Hrytsiuk’s unique style was clearly revealed was the sculpture “Icon painter. Theophanes the Greek”. In the coming years, he made no less convincing images of Ihor Stravynskyi, Borys Pasternak, Mstyslav Rostropovych. The circle of portraits that most attract the sculptor the most gets clearly outlined: these are outstanding creative personalities who have made an important contribution to the development of world culture and art.

In collaboration with Yu. Synkevych, he creates monuments to Soviet soldiers who died in the German camps of Grosslazaret in Khmelnytskyi Oblast (1971–1972) and Khorolska Yama in Poltava Oblast (1972–1973).


He creates sculptures that will later be called classical: “Artemii Vedel”, “Portrait of conductor Ye. Mravynskyi”, “The artist and his muse”, “Rose of Chile. In memory of Pablo Neruda”, “Victory” (not preserved), “Pablo Picasso” (installed in Toulouse, France), “Violinist Hidon Kremer”, “Portrait of the hero of socialist work, academician M. Amosov”, “Portrait of Alexander Blok”.

The artist’s wife recalls: “Before molding a new work, Mykhailo Hrytsiuk spent a long time, sometimes years, conceiving the image. He did many sketches, but he did it quickly, in one go, as if he were afraid to lose everything he felt and was about to express”.

In cooperation with Yu. Synkevych, he creates a monument to the liberators of the city of Khmelnytskyi from the Nazi invaders (1974–1975).


A joint exhibition of works by Mykhailo Hrytsiuk and Yulii Synkevych is held in Kyiv, which becomes a big event in the cultural life of the city. Hrytsiuk’s work is causes hot discussions both among everymen and colleagues.


The last monumental works created jointly with Yu. Synkevych are the decorative sculptures “Prometheus” in Prypiat and “Nadra” near the YuzhHiproNefteHazProekt building in Kyiv, the project of a monument to Soviet soldiers-liberators in Izium (Kharkiv Oblast), and two monuments to Lenin in Pryluky (Chernihiv Oblast) and Krasilov (Khmelnytskyi Oblast).


Easel sculpture becomes paramount in Hrytsiuk’s work. Then the “Ballerina” appears, one of his most famous sculptural portraits, for which ballerina and actress Liudmyla Oskret posed. Mykhailo Hrytsiuk’s last work is “Portrait of Composer S. Rachmaninov”.


The sculptor undergoes an unsuccessful kidney operation, and as a result of his postoperative complications, he dies in Kyiv on August 10. 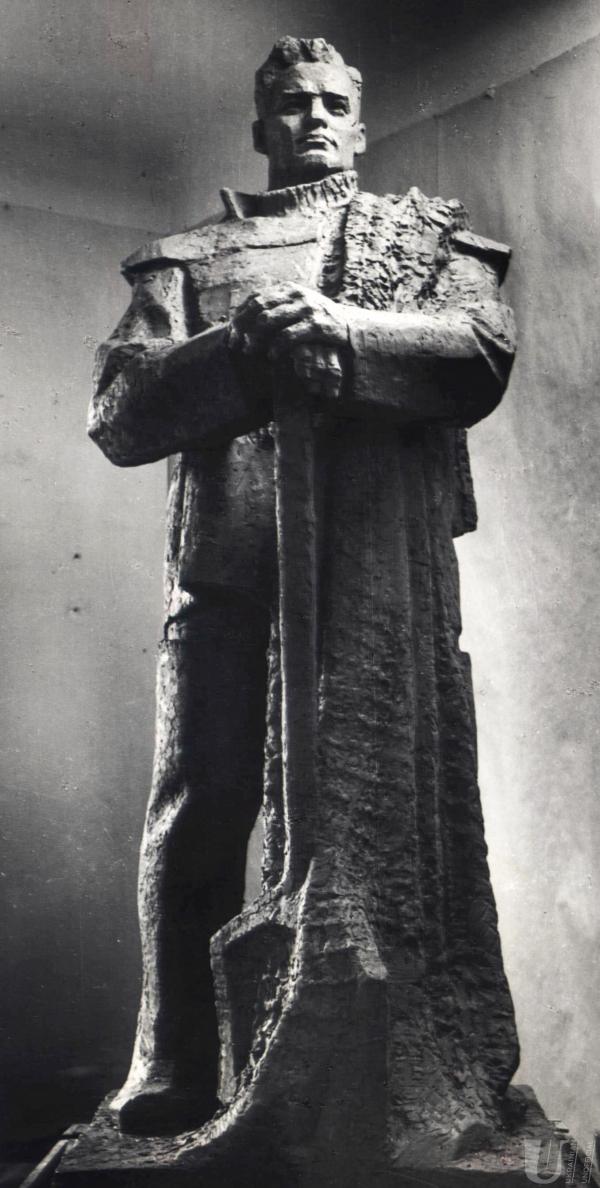 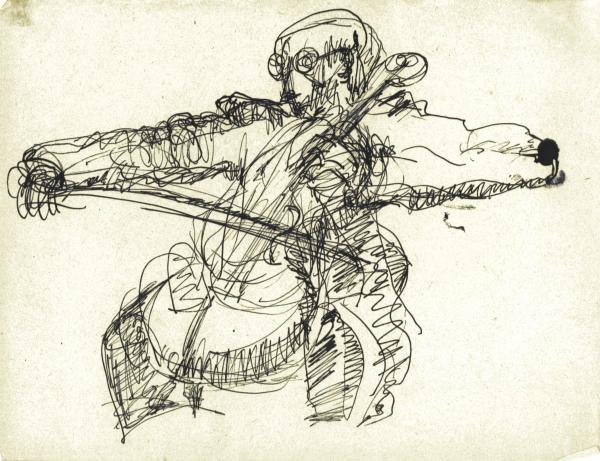 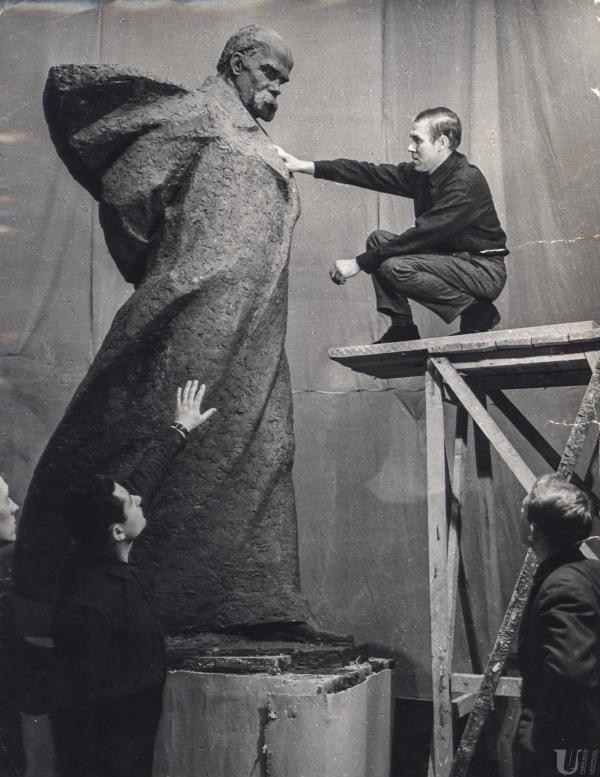 Working on the model of the monument to Taras Shevchenko. 1964 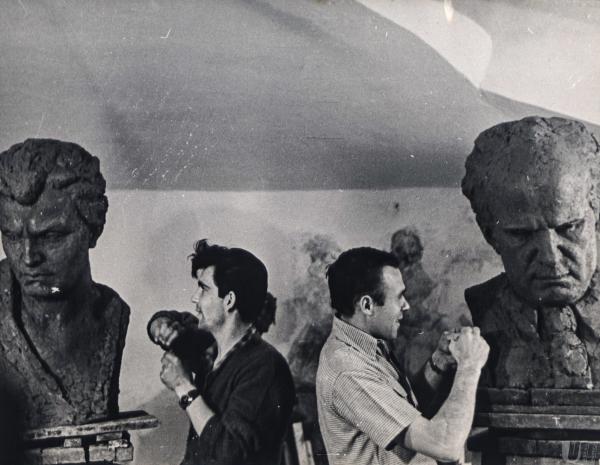 In the workshop of the Kyiv State Art Institute. Anatolii Fuzhenko (left) and Mykhailo Hrytsiuk are working on portraits of filmmaker Sergei Eisenstein. 1959 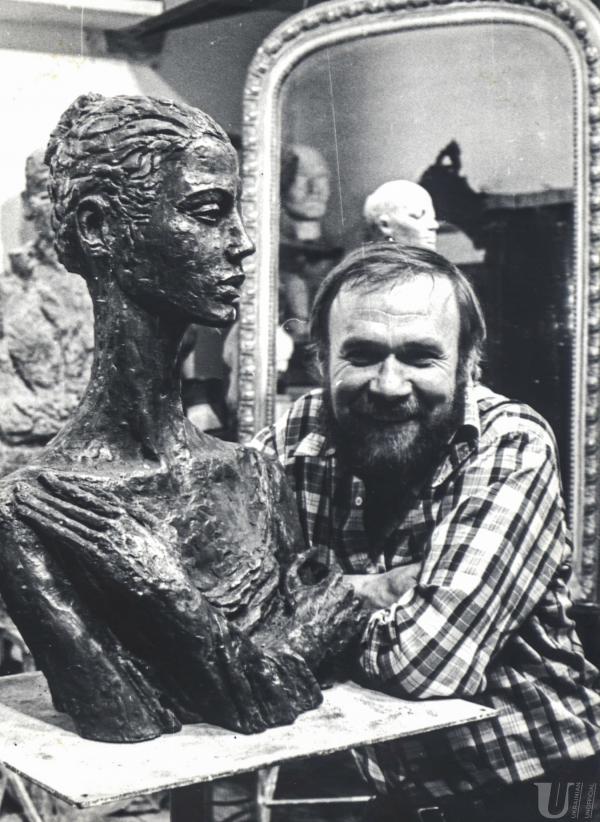 Mykhailo Hrytsiuk near his work “Portrait of the Ballerina L. Oskret” in the studio on Dashavska Street. 1978 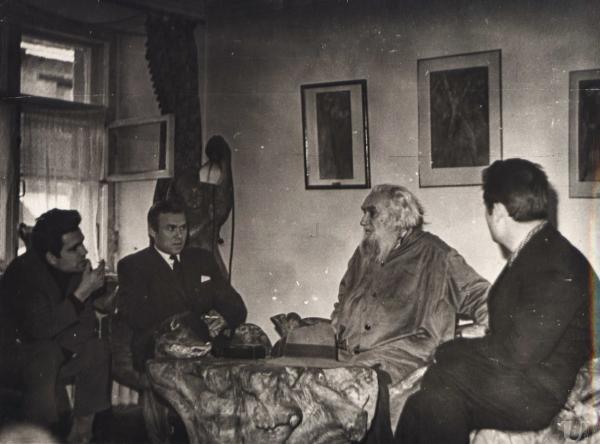