Born into the family of military cartographer Dmytro Petrovych Aksinin. An important role in the boy’s upbringing belongs to his grandmother, Oleksandra Nesterova, a repressed teacher of Russian literature who returned to Lviv in 1952 after 10 years in exile. The artist’s worldview is largely shaped by childhood impressions of the ancient architecture of Lviv and its museum collections, as well as the environment of local intellectuals who have long traditionally collected books.


Aksinin receives the basics of art education in the evening art school (1963–1966). In 1967–1972, he studies at the Ukrainian Polygraphic Institute named after I. Fedorov at the graphics department. He usually ignores academic disciplines, misses classes, and devotes a lot of time to self-education. Already in the late 1960s, contrary to the curriculum, he experiments with forms of existential art, Tashism, and op art. Figurative metaphors, which are trendy in official graphic illustration, disappear immediately after he defends his diploma: at that time the artist already has a unique sign system that mocks the absurdity of social order. For example, one of Aksinin’s courseworks — the cover of the book “Gelsomino in the Land of Liars” (1971) — is a metaphorical projection of social falsehood and irony over it. The further evolution of the artist’s personality is connected with the study of philosophy, aesthetics, and prose which is popular in the West at that time. He develops a special graphic meta-language, which is, in fact, an illustration of his own individual worldview theory.


Serves in the military (1973–1974): first in Brody, then in Lviv, where he participates in the formation of the exposition of the Museum of the History of the Troops of the Carpathian Military District. Since 1974, he worked as a designer in the design bureau of the Ministry of Light Industry. Acquaintance with the artists from the graphic workshop of the Art Fund inspires creating the first etchings.

Aksinin actively works on spiritual self-development: reads self-published translations of Western philosophy, masters of the spiritual practices of Taoism and Vedanta. Comprehension of aesthetic theories is accompanied with the compilation of textual schemes; later, he adds to them semiotic instructions and drawings. European absurdism can be considered a peculiar basis of Aksinin’s escapism: Aksinin treats F. Kafka’s work as a religion (“Kafkaesque”), analyzes Camus’s works in the categories of “past” and “future.”

Until the mid-1970s, most of Aksinin’s graphic works were a cryptic reading of a sarcastic message to the owners of ex-libris, where most of the images are figurative metaphors, with barely visible quotes or aphorisms. Sometimes among the texts there are statements from theories important to the artist — by anti-globalist and esthete Theodor Adorno or “intellectual observer” and cultural theorist Paul Valéry.

Since 1975, multistage metaphysical structures — spheres, bionic forms, riddles, and labyrinths — emerged in his creativity as a result of mature thought processes. The artist organizes and visualizes all philosophical systems, so most of his bookplates are also structural models of certain worldview concepts. Time-space thinking and the search for relevant theories (Albert Einstein, Mikhail Bakhtin, the Chinese “Book of Changes”) are the basis for the development both of the imaginary world of Aksinin and the artists of his circle.

In 1977, he left his job at the design bureau to devote himself entirely to creativity. Aksinin’s autobiography dated 1977 states: “First Revelation with a Concomitant Sense of Time.”

From the mid-1970s, the apartment of Oleksandr Aksinin and Enhelina Buriakovska became the center of informal communication between cosmopolitan artists. Aksinin himself at that time was in close contact with artists from Lithuania, Estonia, Poland, and Russia.


A turning point in Aksinin’s work. The artist visualizes various ontological systems and tries to extrapolate this method to structural compositions, where each new structure is a model of a certain worldview. At that time, a number of repressive measures were being taken in Lviv against modernist manifestations in art, and Aksinin’s circle of friends automatically closed itself for the rest of society.

The series of graphic and color metaphysical compositions of that time were marked by the semantics of “masquerade” and “absurdity,” which was the artist’s reaction to “Soviet reality.” At the same time, these works clearly fit into the typology of “hermetic art,” as they reflect the culture of a closed intellectual milieu (series “Boshiana” and “Kingdom of the Absurd by Jonathan Swift”).

In watercolor and etching compositions of 1979 there is a cosmogonic figurative line, which in minimalist forms “illustrates” the artist’s position on the intangible substances of the surrounding world (series “Canonical Images,” “Cosmology,” “Asclepius’ Cockades,” “Numbers — Chronos,” “Time”). In the same year he creates a series of structural ex-libris on the topics of “zodiac signs” (figurative typology is the stylistics of Chinese miniatures), “celestial hierarchies”, and “imaginary worlds” (following the example of Maurits Cornelis Escher).

Since 1980, with notes of self-irony and critical sensualism, he was building an imaginary microcosm with multi-layered semantic structures in the form of mandala, leading to modular spatial abstraction (cycles “Months” and “Sounds”). The specific semiotics and iconography of these years are tied to bionic typologies: apple, pear, pomegranate or aspen nest, hive, cube unfolded in various projections. There is also a specific texture of “fish scales” (meditative form). A special place is occupied by “ontological comics” of the “Metalanguage” series, in which Aksinin’s way of perceiving reality and algorithm of thinking become obvious.

1981 — “Second Revelation with a Concomitant Sense of Eternity.” Aksinin visualizes Husserl’s phenomenological position on the fiction of being and being here and now: images are surrounded by a black background, which is a kind of metaphor for eidetic variations with the slogan “regain the world through universal self-knowledge” (Aksinin’s statement). Among the minimalist works is an ex-libris or the library of the Abbey of the Order of the Benedictines in Lubiń, which brings Aksinin international recognition. That year, paintings of a suprematic nature, including “Monogram of Aksinin,” “Crows,” “Three Crows” appeared.

In the graphic works of this period there are figurative personifications of “female lips,” “two-headed woman,” “headless female torso,” which symbolize the Freudian reading of human nature (apparently due to concentration on his sick wife, Enhelina Buriakovska), and which interact with various semiotic systems.


After the death of his wife, Aksinin’s work is marked by depressive images on the theme of transcendent existence, death, and the phenomenon of suicide. During this period there appear many diamond-shaped and square minimalist compositions made in watercolor and colored ink, lots of structural-semiotic works, which relate to the concept of “mystical revelation,” as well as multi-iconic structures inscribed in the shape of a cross and square (projections of Aksinin’s metaphysical cube).

In 1983, he makes a series of compositions combined by the topic of “metaphysical room” (series “August”); creates ironic images of “time” (series “Operation,” “Wells”), and discloses the spiritual categories of prayer and repentance (series “Paraphrases,” “Hand,” “Texts”).


Returns to figurative prototypes: the faceless female torso, woman in the cage, three-faced Buddha, mystical bird, two-headed Pegasus, and the personifications of the Kundalini (the image of human physical energy). All of that year’s compositions have personal dedications and are built on the Eastern iconic principle: a central figure, a local dark background and a light plot covered with texts.


Period of ascetic solitude and visualization of established categories of happiness in solitude and resurrection (cycles “I Ching,” “Manifested Sound,” “Months. East”).

On May 3, 1985, returning from Tallinn, Oleksandr Aksinin dies in a plane crash over Zolochiv, near Lviv. He was buried in Yaniv Cemetery. 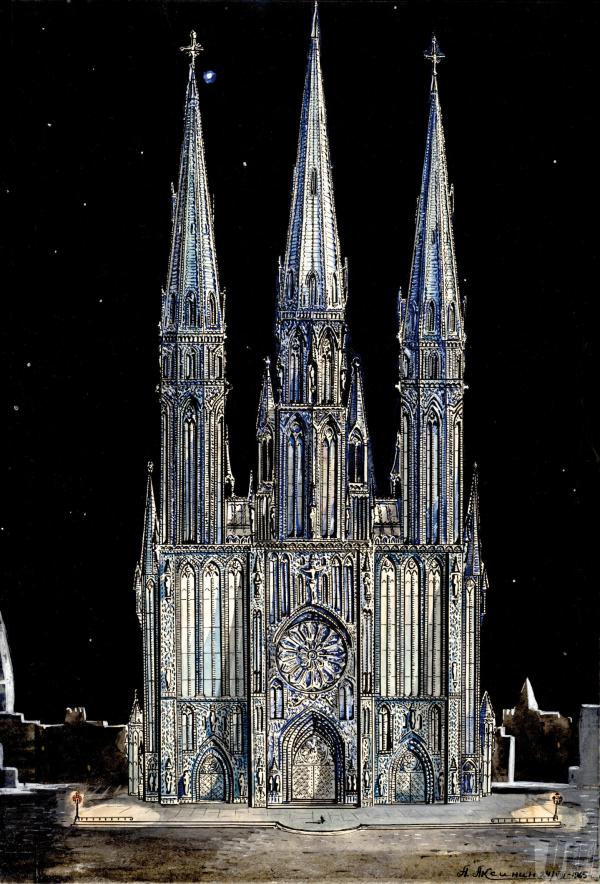 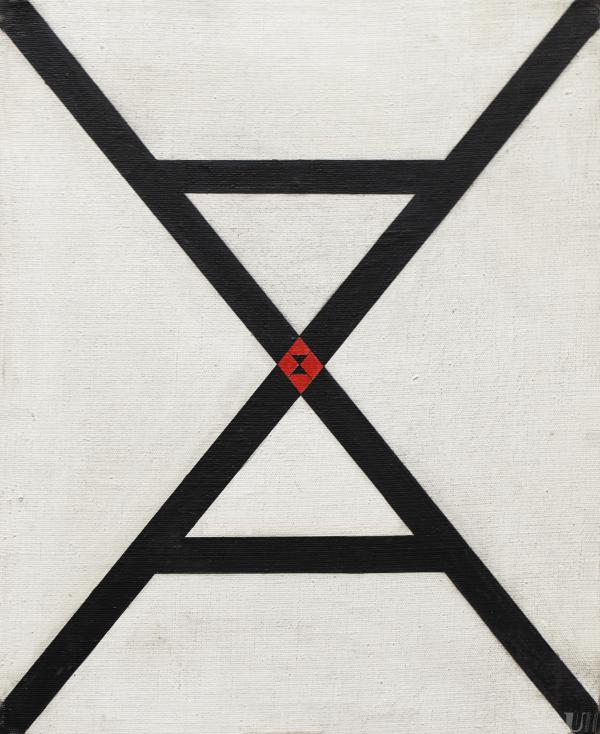 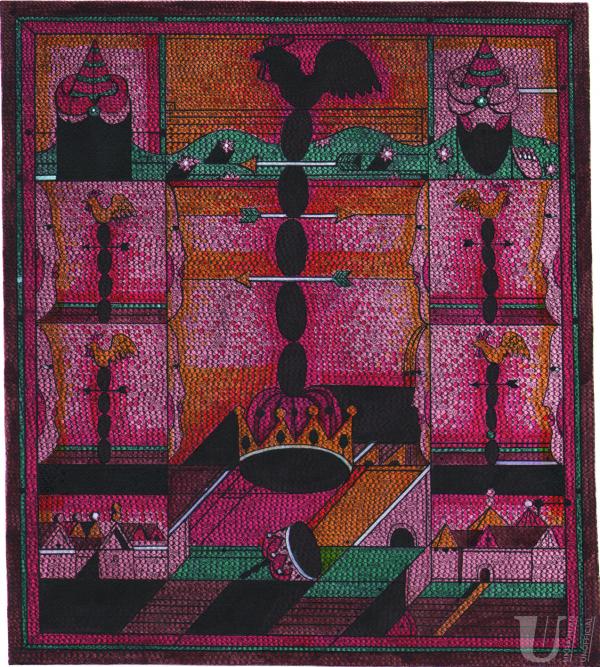 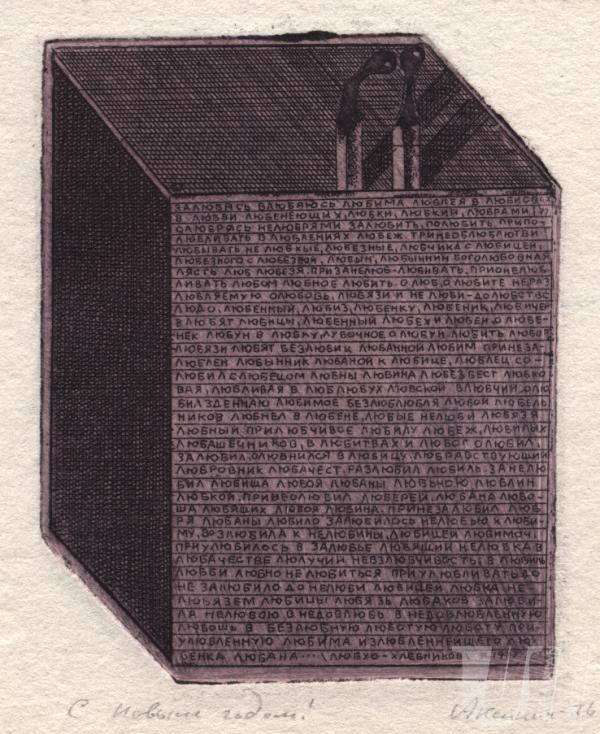 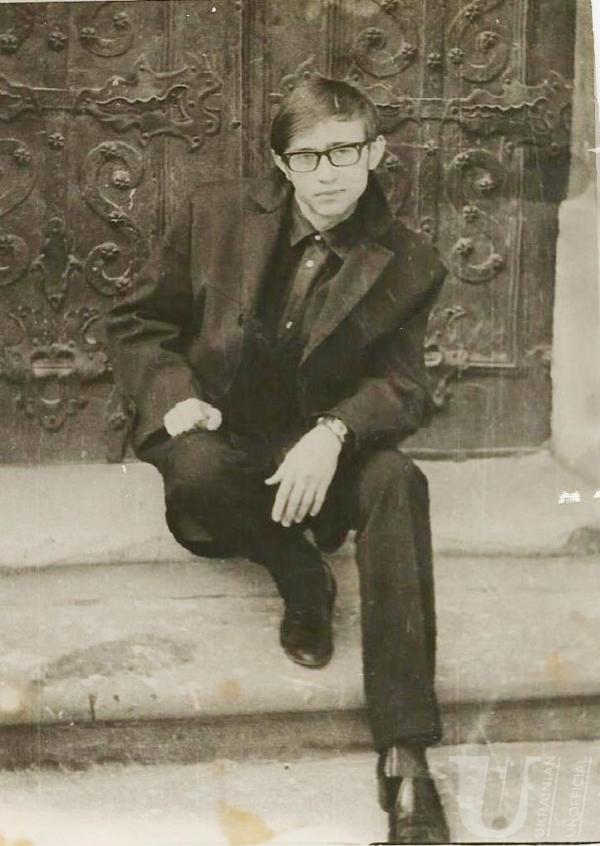 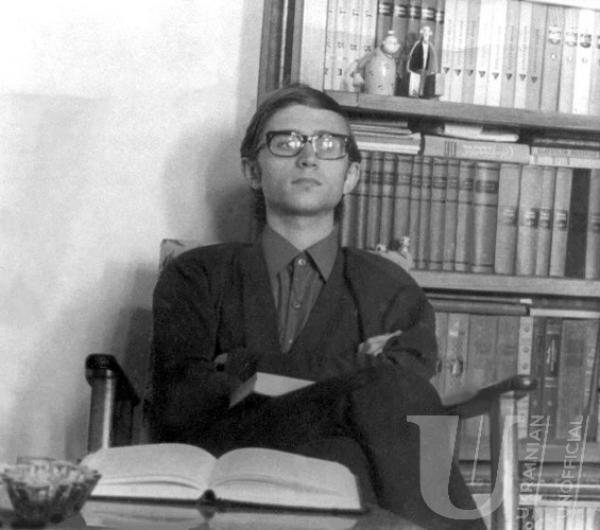 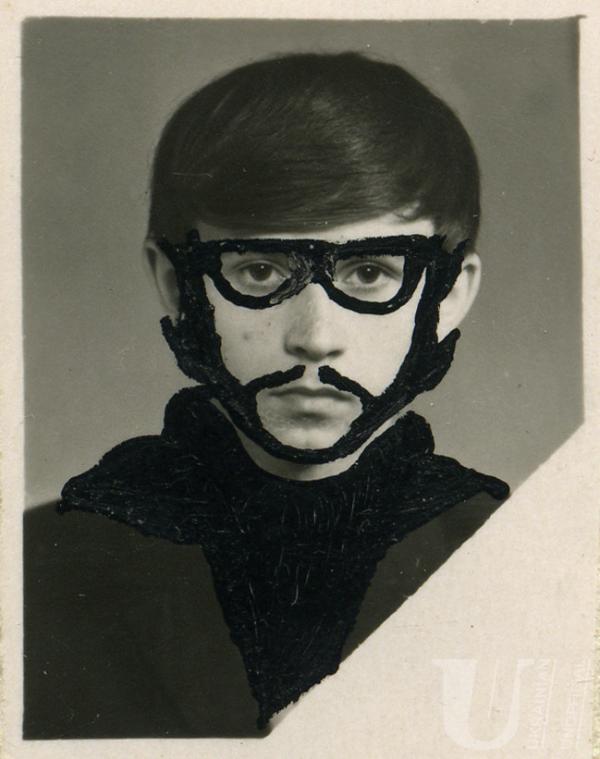